Get the RFA Mobile App (free):

When first opening the app after installing on an Android device, you will be asked:  “Stop optimizing battery usage?”  Select “ALLOW“.

If you select “DENY”, when your device is not connected to a power source and you allow the screen to go dark, the app will stop playing music after 5 minutes of inactivity.  This is due to a battery-saving feature introduced by Android beginning with Version 6.  Selecting “ALLOW” lets the Radio Free Americana app run in the background, not restricting its battery usage.

Following are screenshots (resized for display purposes) of the RFA Mobile App: 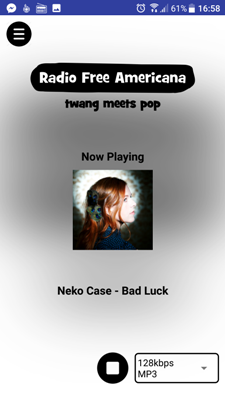 By default, the RFA Mobile App will play our 64kbps AAC+ stream when you click “Listen Now”. If you prefer to listen to the 128kbps MP3 stream, you can access it via the app’s drop-down box (see illustration above).

When listening on your mobile device over a cellular network, we recommend the 64kbps AAC+ stream.  Because it requires less bandwidth, (1) it will be the most reliable option on networks with limited capacity, and (2) it will conserve data usage (possibly saving you money if your data plan is limited).  Importantly, an AAC+ stream at 64kbps sounds nearly the same as a MP3 stream at 128kbps.

From your mobile device, click the desired player below…

Disclaimer:  RFA web players include display ads.  These ads are required by the developer (who is solely responsible for the placement of ads) in order to offset development and maintenance costs.  RFA receives no revenue from these ads nor does RFA endorse any of the advertisers or their products or services.  In any event, ads do not interrupt the audio stream.

Still need help tuning in? Contact us and we’ll help you get it sorted.

From pure pop for now people to pure slop for cow people; from three chords and the truth to two chords and a sack of lies; Radio Free Americana is non-discriminating free-form radio for the discriminating listener.

RFA is not focus-group tested.